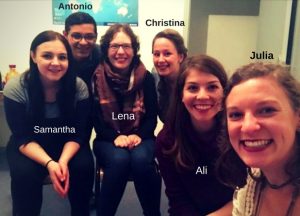 First of all, what does it mean exactly being a language assistant?

Sam: You role as a language assistant is to travel abroad and share your culture and linguistic knowledge of your native country with student of different ages around the world.

Lena: For 12 hour per week, we assist teachers who teach our mother tongue, this includes German preparation and fun activities like games

Christina : As a language assistant you are an ambassador of your country. Your purpose is to interest students in other countries in your language and your culture. Ideally, you add authenticity to the foreign language classroom as the students can experience the culture and language of a foreign country with you and through you and in the best case scenario you motivate them to improve their foreign language proficiency and their connection to your country.

Having a language assistant is also a benefit for the French teachers of a foreign language because they get to speak the foreign language on a higher level than the one possible with most of their students. This in turn benefits the students.

The assistants, too, profit from this experience because they have the opportunity to gain deeper insight into the foreign country and its culture as well as the opportunity to improve their language proficiency. It is a win-win situation for everyone.

Antonio : In a few words, to be a language assistant means to represent your language, country and culture. Personally, I think people become language assistant due to their own sense of determination to teach something through their native language

Ali : I teach English to students ages 5-12 in Château-Chinon, I prepare lessons for each class each week and lead the class. I would say I am the English teacher for many classes in Château-Chinon because the teachers let me take over the class!

Julia: As a language assistant, I work 12 hours a week at local schools (Lycée Jules Renard and Collège Adam Billaut) presenting lessons on the English language and American culture. I also assist teachers by supplementing their lessons with games or activities for their students. As an assistant I am not responsible for entire classes, but work with small groups of students at a time.

Lena: I work from Monday to Thursday. During the weekends, I travel, I prepare my lessons or I meet other assistants.

Sam: As a language assistant, you must work 12 hours per week in 1-3 different establishments (from nursery to secondary school: 5-18 years old).Sometimes, you simply “assist” the regular teacher with their lessons , and other times, you take small group or half of the class and do a separate lesson with them .

Christina: My week is not very stressful. I work Monday through Thursday at three different lycées and I only work twelve hours per week which leaves enough time to hang out with friends, explore France, exercise, work on my French and enjoy French cuisine and cinematography. I also try to keep in touch with family and friends on a regular basis.

Antonio : I work 12 hours per week with the Spanish teacher. However, I spend more than 5 hours with my lessons planning. So my week is almost a kind of part time job where I create games for the students for learning my language.

Ali : I work in Château-Chinon Monday-Thursday and take the bus in the morning and evening to commute. It’s far !

On the weekends I spend my time with people in Nevers or often will travel !

Julia: My schedule is very manageable as I work three hours a day Monday-Thursday. I work at Jules Renard Monday, Tuesday, and Thursday and at Adam Billaut on Wednesday mornings. On Tuesdays, in addition to teaching regular lessons, I also offer a remediation session at the Jules Renard dorms for students who need help outside of class. I work most mornings and spend my afternoon’s lesson planning or offering private lessons.

Is it difficult for you to find activities here?

Sam: I lived in a relatively big city in the UK, so at first, it was difficult to find activities, especially during the summer holidays. I found “Langues de chat” pretty by chance and that allowed me to make friends and find activities to do.

Lena: no, once I found “Langues de chat”, it was quite easy J

Christina : Nevers is surely not the biggest city but I find it charming and it does offer several enriching activities. I believe, however, what matters most are the people and thanks to the assistant program and to “Langues de chat” I have encountered some wonderful people with whom I enjoy spending time.

Antonio : Maybe I have difficulties to find activities which I usually do in my country. But this is not a problem because in my free time I go out with friends or we stay at home watching movies or listening to music.

Ali : now that I have found friends through « Langues de chat » I spend time with them !

Julia: Thanks to “Langues de Chat”, no! I met Sam (the British English assistant) on Facebook over the summer and when I arrived in Nevers she introduced me to Langues de Chat and the people she’d met since arriving. Through Langues de Chat and my teachers at both schools, I’ve discovered a lot of activities in Nevers: run clubs, concerts, literary festivals, and other social events.

Is it possible to pursue your hobbies here?

Sam: My hobbies are quite varied, so I find that I can pursue them almost anywhere. I enjoy meeting new people and learning about different languages and cultures, so “Langues de chat” is perfect for this, I also love cooking, which can be different sometimes as it can be hard to find spatiality ingredients in Nevers, compared to the UK. It has been from though to try and experiment with new foods.

Lena:  yes, because I play some instruments which I couldn’t bring Ce.g. a piano and it’s quite expensive to subscribe to sports club.

Christina : In general yes because one of my hobbies is running, something you can do anywhere, but I also find myself trying different things here.

Antonio : Not at all, fortunately  with my friends in Nevers I have great moments to read, travel and learn about culture.

Ali : It’s easy to take the train and travel which is greet, I love to hike and can go to « the Morvan »if i want to hike.

Julia: Absolutely. I’m a big runner and I find it very easy to run in Nevers as the city is relatively flat and there isn’t too much traffic. I’ve also met a lot of people who share my love of running, so I’ve always got a friend to run with. I also love writing and my light teaching schedule leaves me ample time to be creative and write about my experiences in France.

How did you find out about this opportunity, is it something popular in your countries?

Sam: I already knew about the British Council programme from my time at university. As a student of foreign languages, I had to spend a year working, studding or teaching in another country, so I had already taken part in the programme in Austria, this time I wanted to see how the experience was different in France.

Lena: I have a friend who did it before. For students who want to become a teacher it’s popular.

Christina: I study English and French to become a teacher and considering that I do not get to speak much French at the university, I started looking for opportunities to go to France without breaking the bank. A fellow student did this teaching assistant program a few years ago and introduced me to it. The rest is history.

Antonio : To become language assistant in France is a dream pursued by the most of French learners. However, it is an opportunity for future language teachers that compete for it. For this reason, international assistance is only widely recognised by teaching languages learners.

Julia: The teaching program I applied to (TAPIF: Teaching Assistant Program In France) is pretty well known in the world of French studies in the US, although it may not be very well known outside of the academic sphere. I found out about the opportunity when I was in high school and one of my older sister’s friends (who went to the same university as I did) participated in the program. As I studied French in college, the TAPIF program was very well known in my university’s French department.

So how many of you had visited France before moving here?

Sam: I had been to France several times already, either as a trip or as part of school exchange. I also studied at the University of Poitiers in 2015 for a summer.

Lena: I leaved with a host family in “campagne” for 6 months when I was in high school and I also travelled to France before.

Christina : I spent a week in Paris and a weekend in Nancy – not nearly enough time in France if you ask me.

Ali: I studied in Dijon for 4 months in 2015 and I have travelled to France 3 other times as well.

Julia: I had studied abroad in Lyon during the fall of my third year of college (2015). I spent four months studying at Université Lumière Lyon 2 and Sciences Po, while living with a host family.

Did you speak French before and how long have you learned and is it necessary to speak it to go to another country?

Sam: In the UK French is the second language that we learn at school, so I had already started learning the language at 11/12. I don’t think it’s necessary to learn a language in order to travel because lots of people speak English, but I feel that it definitely helps a lot, because it must easier to integrate and truly get involved in daily life. I also believe that English/British people have a bad reputation when it comes to learning languages and I like to prove people wrong.

Lena: I learned French since 12 years and I also practiced a lot during my first time in France. For travelling, living in France! I think it’s really necessary to speak French.

Christina : I started learning French in school at the age of thirteen. After school I went to the United States for two years and stopped speaking French. I restarted in 2012 at the university but as I mentioned before, we do not speak the language very often. I am sure it is possible to use French in other countries, especially in former French colonies and in the French parts of Canada but apart from that English is usually the more useful language tool.

Antonio : Yes, I learnt French in my country 5 years before my experience in France. In Colombia it is necessary to be certified at least by the B1 level of proficiency in French.

Ali : yes, I studied French a little in high school  and more in college. I wouldn’t say it’s necessary to know the language before moving to a different country, but if you don’t  it hard !

Julia: I’ve been studying French for about 10 years, but it wasn’t until after I studied abroad that I really felt comfortable speaking the language. I do think that at least a basic understanding of the language is necessary to travel abroad because of daily activities like buying groceries, ordering at restaurants, and asking for directions that you may encounter.