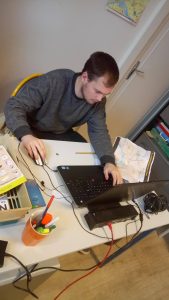 My name is Daniel Kvist Hasbo. I am from Copenhagen, the capital of the small Scandinavian country of Denmark!

I am in Nevers to do a year of volunteering in the project “Lets Grow Together”. It is a project mainly based on sport but with some additional activities as well. Mainly the radio programme Carnet d’Europe and the multilingual café “Langues de Chat”.

I chose to come to Nevers on EVS because the project really suited my interests and the bonus of learning French is nice as well. I might be going to study in Brussels next year so knowing French would come in handy!

My day of arrival was an exciting day. I took the plane at 12:00 and 2 hours later I landed in Paris. Everything was a little bit overwhelming at first. The metro map of Paris is huge and finding my station of Bercy proved a bigger challenge than I thought. I also sadly did not have the time nor the energy to see much of Paris except the metro. The metro sure was busy though as you would expect from a metropolis. Making the metro travel worse was the very heavy suitcase I had with me. Going up and down stairs in the metro proved to be quite the workout. Once I finally arrived at Bercy station I was extremely exhausted, and I therefore couldn’t help but taking a long rest at the waiting station. After about 30 minutes of half-sleeping it was time for my first baguette in France! I of course took it with me on the train to Nevers.

The train was very old-school compared to what I am used to but that only adds to the charm I think. The train ride was nice and the landscapes beautiful, although sadly I did end up falling asleep. Finally I arrived in Nevers and I was greeted by my mentor and roommate who took me to my future home. A lovely house just next to the Loire River, where I would have my own room living with my two roommates. My roommates had prepared a big dinner, it was a very nice welcome but as I said earlier I was very tired and my whole body was sore from the trip. I almost fell asleep whilst eating and I did sadly have to go bed earlier than the rest. I fell asleep like a rock right as I lay down. 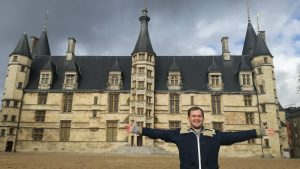 Nevers did make quite an impression on me the first night, as the first thing I saw was the very impressive and a little ominous cathedral towering over the city on top of the hill. French cathedrals really are something else compared to Danish ones. They are far more elaborate than Danish ones and I think far more impressive. Nevers is a quaint, old little city to me. The city center is filled with old buildings and curvy roads making the atmosphere very cozy. The people seem very friendly to me as well. Everyone is very welcoming and contrary to the stereotype French people have been very accommodating to me not knowing French very well. I have just started taking French classes and I have no doubt this is going to improve it a lot. 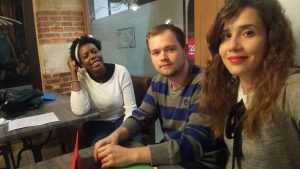 The weather did also surprise me a little bit. It is often just as cold as Denmark! Though far less windy, and with some very nice (Danish) summer days mixed in. The sun does also shine a lot more but the temperature is often about the same as Denmark. I also think the difference in temperature between night and day is a bit more extreme here, from frost to 15 degrees in one day! Denmark is far milder in comparison. It is difficult to pick to attire here because of these changes. You never know if you need a jacket or just a sweater! 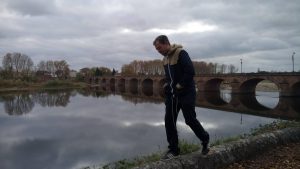 My sport activities here have been very fun and varied as well which I like a lot. I do cycling, orientation; swimming, and athletics with children and multisports (volleyball, football, table tennis and badminton) with adults. I also take part in a gym class on top of this. I’ve greatly enjoyed all of these and I especially like that many of the activities change week by week. I love the fact that I am always doing something new!

I’ve greatly enjoyed my first month here in Nevers and I am just getting started. Coming to a new country, with a new culture, where people speak a different language, and not much English has been a bit of an adventure. I look forward to many more adventurous months like this one in the future! That is all from me.